Rebound weight gain—the rapid regaining of weight that had been lost—is a common occurrence with many popular diets. It’s also frequently experienced by athletes of both sexes who compete in fitness or bodybuilding. Frequently overhead from competitors are comments such as:

“Now that the show is finished, I don’t have to be so strict with my diet, but I just can’t stop eating.”

“I’ve put on so much weight after my first bikini competition.”

“I find it harder to lose weight the second time around, and I just don’t understand why, because I’m following the same program and the same diet as last time.”

“I lack motivation getting back into things after competing.”

To understand how rebound weight gain happens, let’s start by looking at the typical fitness diet, if there is such a thing. These are some of the basic factors:

Usually, starches and fats are stripped down close to a competition to reduce muscle glycogen as much as possible while maintaining muscle mass. Both are essential to looking “shredded” onstage.

Even a weight-loss-promoting diet like this has some potential pitfalls:

Most athletes are careful not to make these common mistakes, but even the most calculated diets can result in post-competition weight gain and an inability to lose weight even years later.

The reasons are simple: It is not sustainable and it changes the gut microbiome.

To understand post-competition rebound weight gain, as well as why over time it may become harder to lose fat, we need to look at the gut microbiome, its influence on metabolic functions, and how diet affects this in the long term.

The Role of the Gut Microbiome in Weight Loss

Gut bacteria have the job of breaking down dietary fiber and turning it into short-chain fatty acids such as butyrate, which helps to feed the cells lining the colon, regulate immune function, decrease appetite, and improve insulin signaling in fat cells.

The microbiome also affects fat metabolism through the suppression of lipoprotein lipase activity in the fat cells. Lipoprotein lipase is an enzyme that breaks down fats in fat cells to be used for energy, and its activity is high during weight loss. Hormonal peptides such as insulin suppress lipoprotein lipase function—which explains why insulin isn’t just an anabolic hormone that helps build muscle. When insulin is present in higher-than-normal amounts, it also can encourage fat storage rather than breakdown. This is commonly seen in people with insulin resistance. 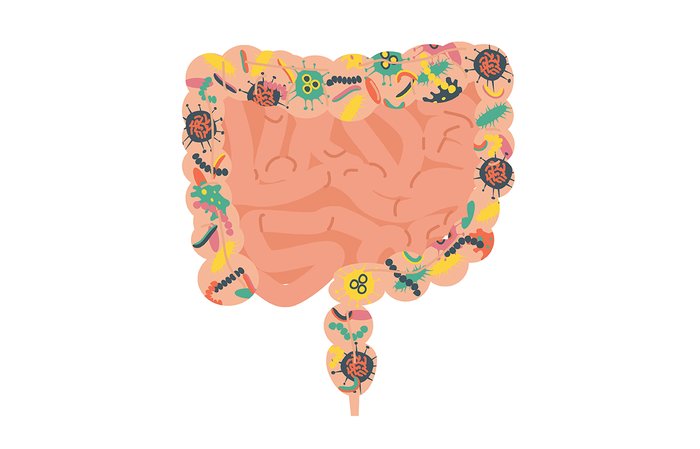 Maintaining a balance between various microorganisms in the gut is important when it comes to preventing metabolic disorders and supporting weight loss. It is estimated that human gut bacteria provide 2-3 million bacterial genes in the gut alone to regulate digestion, fat absorption, carbohydrate absorption, insulin, hormones, and neurotransmitters. Human gut bacteria provide up to 100 times more unique genes than our own genome does![1] So the human gut microbiome is both rich and diverse.

Regarding weight gain and loss, gut bacteria can be divided into two categories: high gene count (HGC) and low gene count (LGC). The HGC microbiome includes species such as these:

The HGC-dominant microbiome tends to favor the production of the short-chain fatty acid butyrate and hydrogen. Both are needed to regulate immune function in the gut by feeding good bacteria and killing bad bacteria.

When robust, this type of microbiome is associated with a lower rate of developing metabolic disorders and obesity, as well as improved gut barrier function, reduced body weight, and improved glucose and fat metabolism.[2-4]

The LGC microbiome include species such as:

The LGC-dominant microbiome tends to be more pro-inflammatory and is associated with insulin resistance and leptin resistance, higher body-fat mass, dysregulated fat metabolism, and a pattern of gaining more weight over time—even when controlling caloric intake.[5]

With that as a backdrop, here’s how a contest diet may actually set someone up for bingeing tendencies and weight gain. 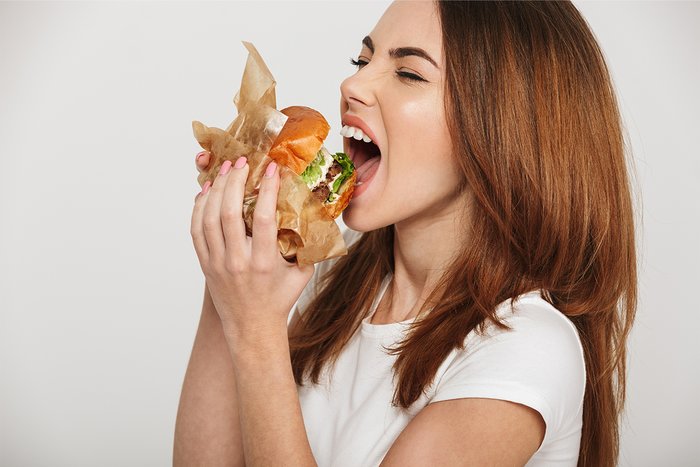 Under conditions of caloric restriction, when carbohydrates and fats are both restricted and body-fat mass is very low, the body releases less leptin, which is the hormonal peptide that monitors energy availability and expenditure in the body. Leptin tells you when you are full and when you should be feeling hungry based on your energy stores. It protects against starvation, and lower leptin levels will make you feel hungrier—a common occurrence pre- and post-competition.

Having low leptin means it takes you longer to feel full after eating. In one study comparing 67 women with eating disorders and 25 healthy women, researchers found that leptin was high in those with binge-eating disorders and low in those suffering from anorexia and bulimia.[6]

Bringing It All Together

Competitors typically become very hungry as their competition nears. Restricted-carbohydrate diets lead to cravings for carbohydrate foods. Low leptin due to ultra-low body fat signals the body to eat more, initiating bingeing-type behavior post-competition. It takes longer to feel full, so you feel as if you just can’t stop eating. By the time leptin secretion kicks in, it may be a lot more than necessary, which may result in leptin resistance. Likewise, insulin will be released to cope with the increased intake of carbohydrates, which will lead to the storage of a lot of sugar in fat cells. (All carbohydrate besides fiber is broken down into sugars.) On top of this, your thyroid function is suppressed, another development promoting rapid weight gain. 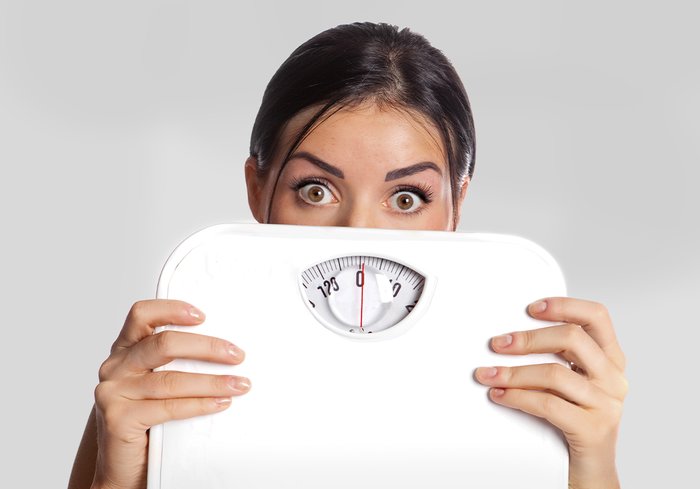 There’s an additional factor at work here affecting fat metabolism, and that’s the gut microbiome. As mentioned above, when it comes to fat loss, the goal is to encourage the growth of HGC organisms and butyrate producers because HGC organisms promote insulin and leptin sensitivity, regulate inflammation, and regulate fat and sugar metabolism. At the same time, it’s important to discourage the growth of too many LGC organisms.

Diet is the main factor influencing this microbial gene richness and thus your ability to lose weight, independent of the calories consumed in your diet. As an example, a long-term diet low in fiber but high in animal proteins and fats has been found to favor the growth of Bacteroides spp., while a diet low in fiber but with a higher content of simple carbohydrates favors Prevotella spp.[8]

What types of food play a role in the microbiome and its effect on fat loss?

Dietary polyphenols are bioactive compounds found in fruits, vegetables, and some grains, most notably in the skins and peels of colorful fruits and vegetables. They have modbiotic-like properties that can influence the microbial richness of the gut.

Poorly absorbed in the small intestine, polyphenols travel through to the large intestine, where they are metabolized by gut bacteria into various metabolites that either help regulate the ratios of bacteria in the gut environment or are absorbed into the bloodstream where they provide more systemic benefits.[9]

The intake of in-season polyphenols has also been associated with improved HPA axis signaling and improved leptin signaling.[10]

Various types of polyphenols have been shown to encourage the growth of HGC bacterial organisms such as Akkermansia[11] and Bifidobacteria,[9] while decreasing the growth of LGC organisms such as Staphylococcus,[12] Bacteroidaceae, and Clostridium perfrigens.[12,13] Examples of foods that have high polyphenol content include green tea, apple peel, pomegranate peel, skins of berries, citrus fruits, and black rice. 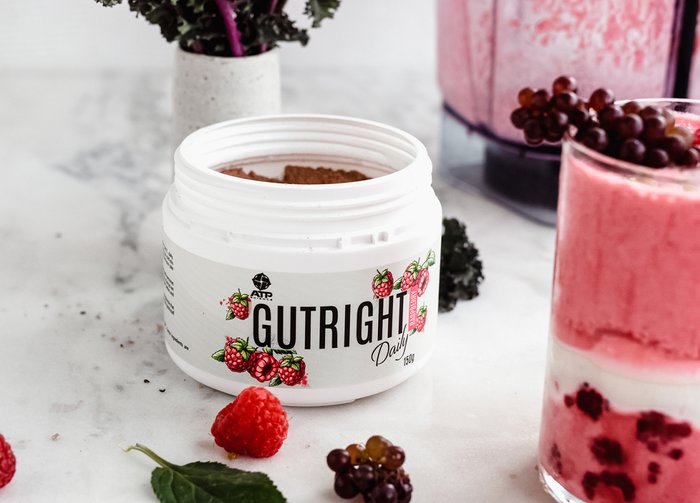 The ratio between butyrate and acetate is often used as a predictor of metabolic syndrome or other metabolic disorders characterized by glucose and fat dysregulation, with a higher butyrate-to-acetate ratio associated with easier weight loss. The type of short-chain fatty acids produced depends on the type of microorganisms residing in your gut and your diet. Aim for about 25 grams of fiber per day.

Dietary restrictions are a part of life for many people who are into fitness. For those engaged in calorie and carbohydrate restriction, adding low-caloric supplementary polyphenols, fiber, or both may help them achieve their competition goals while preventing changes to the gut microbiome that may interfere with fat loss going forward.